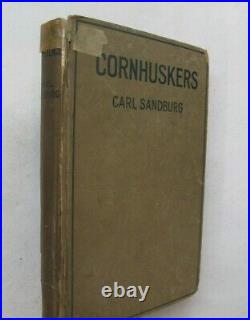 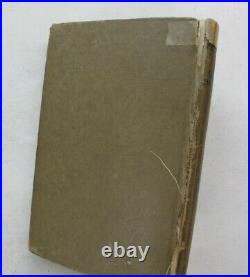 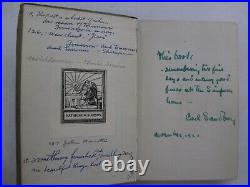 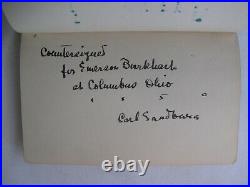 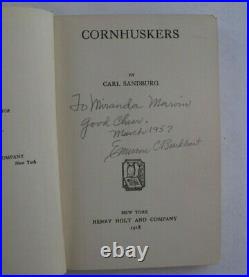 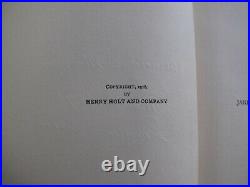 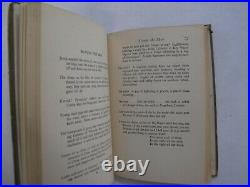 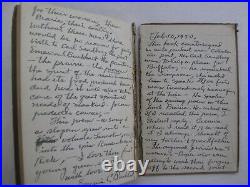 New York: Henry Holt and Company, 1918. A much-handled example with the upper cover starting and the lower cover separated — corners and edges worn/scuffed and with a tape repair to the head of the spine. The rear end pages are completely filled with a handwritten recollection by Burkhart of the occasion when Sandburg inscribed the book a second time and the artist’s thoughts on Sandburg’s poem Prairie. The title page bears Burkhart’s inscription in 1957 when he gave the book to a friend + Burkhart marginal annotations/commentary (for which he was known). Everything we sell is Returnable for any reason. We only ask for prompt notification, within 14 days. Don’t hesitate to ask for more info/detail on any of our listings. HOFFMAN BOOKS, ABAA, IOBA. From Wikipedia, the free encyclopedia. January 6, 1878 Galesburg, Illinois. July 22, 1967 (aged 89). Flat Rock, North Carolina. Abraham Lincoln: The Prairie Years and The War Years. 3, Margaret, Helga and Janet. Carl August Sandburg (January 6, 1878 – July 22, 1967) was an American poet, biographer, journalist, and editor. He won three Pulitzer Prizes. Two for his poetry and one for his biography of Abraham Lincoln. During his lifetime, Sandburg was widely regarded as “a major figure in contemporary literature”, especially for volumes of his collected verse, including Chicago Poems. (1916), Cornhuskers (1918), and Smoke and Steel (1920). He enjoyed “unrivaled appeal as a poet in his day, perhaps because the breadth of his experiences connected him with so many strands of American life”. And at his death in 1967, President Lyndon B. Observed that Carl Sandburg was more than the voice of America, more than the poet of its strength and genius. Emerson Burkhart (1905 – 1969) was an American artist based in Columbus, Ohio. Early life and education. Emerson Burkhart was born on a farm in Union Township near Kalida, Ohio. After attending Ohio Wesleyan University. In Delaware, Ohio, Burkhart moved to Provincetown on Cape Cod, studying with artist Charles Hawthorne. By 1931, Burkhart moved to Columbus to teach at the Ohio School of Art. In 1939, he married Mary-Ann Martin. A famous model who would later become an artist herself. Mary-Ann was a model for several well known artists in New York including Edward Hopper. From his house on Woodland Avenue, Burkhart quickly established himself to be a Columbus Institution. Burkhart became known for his portraits and street scenes of Columbus. He even painted a portrait of famed writer Carl Sandburg, who was a friend of his. In 1934, Emerson Burkhart received a commission from the WPA Federal Art Project. For a mural over the auditorium at Central High School. The Federal Art Project intended to give artists like Burkhart employment during the Great Depression. And provide art for non-federal government buildings. Burkhart created a 13′ by 70′ mural, known as Music, featuring young women and men dancing and playing musical instruments. Just four years later, in 1938, the principal ordered that the mural be painted over as it was too sexy. Starting in 1999, over the course of six years, 1,000 art students from the Fort Hayes Metropolitan Education Center. Under the supervision of art conservators, worked to remove the paint that once covered the mural. After its restoration, the mural was installed at Greater Columbus Convention Center. Each mural featured important historical figures like Walt Whitman and David Thoreau. Burkhart connected the content of his murals to the function of the building, which served as the social work building. In one mural titled Elizabethan Court Life, Burkhart contrasted the life of the wealthy privileged class with those of the working class. The murals are still located in the building today. After the death of his wife in 1955, Burkhart traveled the world with the International School of America. Burkhart died in his home in November 1969. This item is in the category “Books & Magazines\Antiquarian & Collectible”. The seller is “hoffmansbooks” and is located in this country: US. This item can be shipped worldwide.