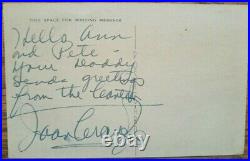 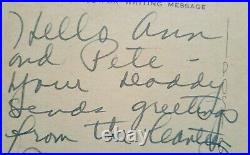 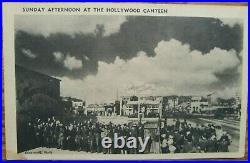 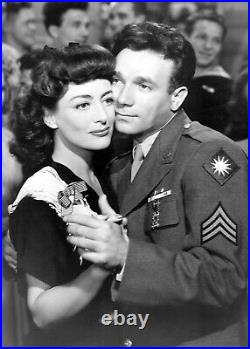 JOAN CRAWFORD – INSCRIBED & SIGNED 1940’S HOLLYWOOD CANTEEN POSTCARD – RARE. Offered here is a stunning artifact from the 1940’s World War ll era THE HOLLYWOOD CANTEEN and film legend hostess JOAN CRAWFORD…. A vintage Canteen postcard signed and inscribed by Ms. Ostcard measures 3 3/4″ x 5 1/2″ and is in fine condition. It is one of those that were given away to soldiers to mark their visit to the Canteen and to send home to their loved ones. This one contains a. Message from film legend Joan Crawfor. To a serviceman’s children about their father visiting the Canteen on a particular evening. It is inscribed by Crawford in bold black steel-tip fountain pen ink. “Hello Ann and Pete-Your Daddy sends greetings from the Canteen, Joan Crawford”. There is a slight brushing to the “n” in “Joan” which was done when Crawford signed the postcard. It’s not much of a stretch to imagine that possibly Joan learned a bit about the serviceman’s background while taking a turn on the dance floor with him. It apparently was never mailed. Perhaps included in an envelope with other correspondence from the soldier to his family. This is an uncommon signed piece. We have only seen a scant few of these signed postcards with Crawford’s signature over the years. Those only contained a smaller and more hurried exemplar of Joan’s signature with her name alone along with minor starlets and lesser known volunteers on the same postcard. A large, fully inscribed and touching exemplar such as this is certainly unique. For illustrative purposes only we have included an image of Joan Crawford dancing with co-star Dane Clark in the 1945 Warner Bros. Flag waving feature THE HOLLYWOOD CANTEEN. Crawford plays herself as a celebrity hostess in the film as she was as a volunteer at the Canteen in real life. Through these portals pass the most beautiful uniforms in the world. Read a sign over the entrance to the Hollywood Canteen. Located at 1451 Cahuenga Boulevard in Hollywood, this canteen operated between October 3rd, 1942, and November 22nd, 1945, as a club offering food, dancing, and entertainment for WWII recruits. The place was not solely reserved for US recruits but was opened to servicemen who belonged to the Allies as well. The ticket for admission was the uniform, and inside the canteen, everything was free of charge. They were offered some coffee or some tea and other refreshments, except alcohol. One of the highlights of the Canteen experience was that these servicemen were able to dance with some of the stars. Many of those stars were B-listed, meaning they had little credits to their names or were often considered starlets, but there were also stars of the caliber of Bette Davis, Joan Crawford or Marlene Dietrich. The item “JOAN CRAWFORD Inscribed & Signed 1940’S HOLLYWOOD CANTEEN POSTCARD Rare” is in sale since Thursday, July 23, 2020. This item is in the category “Collectibles\Autographs\Movies”. The seller is “colinjrt” and is located in Belleville, Illinois. This item can be shipped to United States.