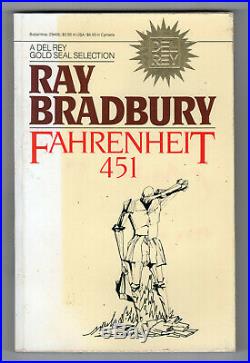 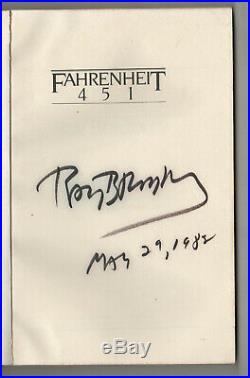 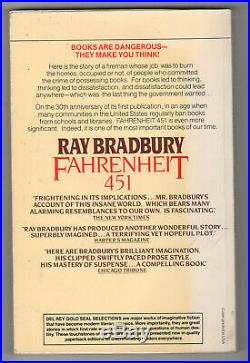 New York: Ballantine, 1981. First Ballantine Books Trade Edition. SIGNED AND DATED BY RAY BRADBURY AT FRONT ENDPAPER. Softcover / 167 pp / General wear; uneven cover fading; light waviness /. Classic signed novel from Ray Bradbury. Fahrenheit 451 is a dystopian novel by American writer Ray Bradbury, first published in 1953. Often regarded as one of his best works, [4] the novel presents a future American society where books are outlawed and “firemen” burn any that are found. [5] The book’s tagline explains the title: Fahrenheit 451 the temperature at which book paper catches fire, and burns… The lead character, Guy Montag, is a fireman who becomes disillusioned with his role of censoring literature and destroying knowledge, eventually quitting his job and committing himself to the preservation of literary and cultural writings. The novel has been the subject of interpretations focusing on the historical role of book burning in suppressing dissenting ideas for change. In a 1956 radio interview, [6] Bradbury said that he wrote Fahrenheit 451 because of his concerns at the time (during the McCarthy era) about the threat of book burning in the United States. In later years, he described the book as a commentary on how mass media reduces interest in reading literature. In 1954, Fahrenheit 451 won the American Academy of Arts and Letters Award in Literature and the Commonwealth Club of California Gold Medal. [8][9][10] It later won the Prometheus “Hall of Fame” Award in 1984[11] and a “Retro” Hugo Award, one of only seven Best Novel Retro Hugos ever given, in 2004. [12] Bradbury was honored with a Spoken Word Grammy nomination for his 1976 audiobook version. Adaptations of the novel include François Truffaut’s 1966 film adaptation and a 1982 BBC Radio dramatization. [14] Bradbury published a stage play version in 1979[15] and helped develop a 1984 interactive fiction computer game titled Fahrenheit 451, as well as a collection of his short stories titled A Pleasure to Burn. HBO released a television film based on the novel and written and directed by Ramin Bahrani in 2018. Ray Douglas Bradbury (/brædbri/; August 22, 1920 June 5, 2012) was an American author and screenwriter. He worked in a variety of genres, including fantasy, science fiction, horror, and mystery fiction. Predominantly known for writing the iconic dystopian novel Fahrenheit 451 (1953), and his science-fiction and horror-story collections, The Martian Chronicles (1950), The Illustrated Man (1951), and I Sing the Body Electric (1969), Bradbury was one of the most celebrated 20th- and 21st-century American writers. [2] While most of his best known work is in fantasy fiction, he also wrote in other genres, such as the coming-of-age novel Dandelion Wine (1957) and the fictionalized memoir Green Shadows, White Whale (1992). Recipient of numerous awards, including a 2007 Pulitzer Citation, Bradbury also wrote and consulted on screenplays and television scripts, including Moby Dick and It Came from Outer Space. Many of his works were adapted to comic book, television, and film formats. Upon his death in 2012, The New York Times called Bradbury “the writer most responsible for bringing modern science fiction into the literary mainstream”. Thank you for looking at our items! Chestnut Hill Books ships to every country in the world at reasonable rates as suggested by the United States Postal Service. Postcards are mailed between sturdy cardboard. We strive to describe each item completely and accurately. Should you have any question about the condition or representation of your item. Chestnut Hill Books is a family-owned antiques business based out of the SouthCoast, Massachusetts. We collect historical items related to New Bedford, Massachusetts and the surrounding area (Dartmouth, Fairhaven, Westport etc), Boston College (tickets, programs, pennants, postcards, scrapbooks, pinbacks, sports & non-sports etc), Massachusetts political buttons & memorabilia and Mount Monadnock in Jaffrey, New Hampshire. We normally respond to all inquiries in a timely manner. Thank you for looking at our listings! The item “FAHRENHEIT 451 Ray Bradbury SIGNED Autograph SIGNATURE Classic DYSTOPIAN Novel” is in sale since Monday, November 4, 2019. This item is in the category “Books\Antiquarian & Collectible”. The seller is “chestnuthillbooks” and is located in New Bedford, Massachusetts. This item can be shipped worldwide.