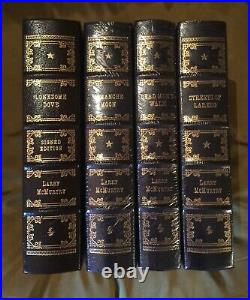 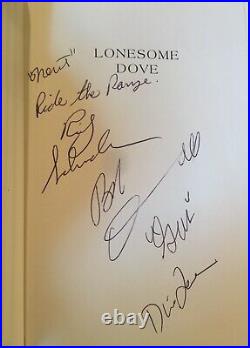 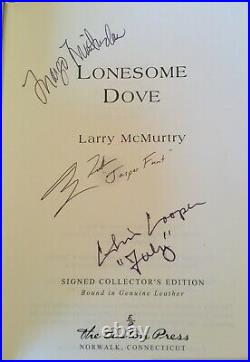 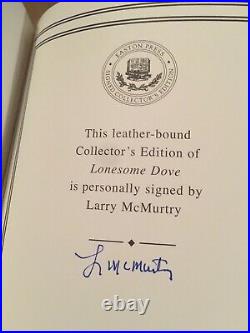 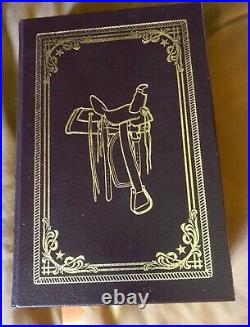 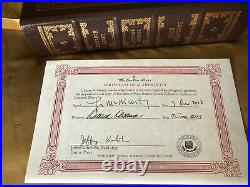 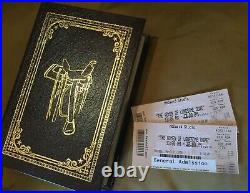 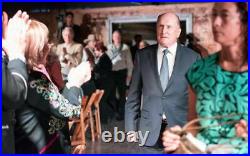 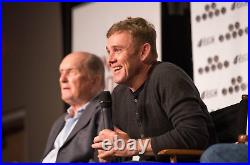 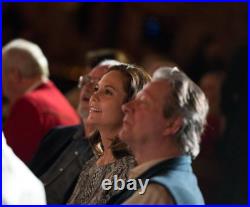 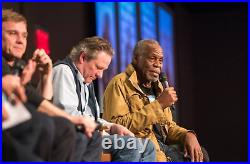 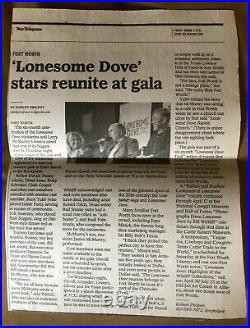 This is the ultimate signed Larry McMurtry Easton Press Collector’s Edition – the set you have been looking for! This is a pristine, unread collection of classic Western tales by McMurtry including still sealed “Comanche Moon”, “Streets of Laredo”, and “Dead Man’s Walk”, PLUS a supercharged “Lonesome Dove” – often called the Texas Bible – in excellent condition only opened to acquire original “Lonesome Dove” mini-series cast member signatures, including ROBERT DUVALL , DIANE LANE, RICK SCHRODER, CHRIS COOPER, BARRY TUBB and MARGO MARTINDALE. EACH book is HAND SIGNED on the title page by McMurtry. All FOUR books come with certificates of authenticity from Easton Press with facsimile signatures of McMurtry and partner Diana Ossana included on the document. These editions are fully leather bound with gilt edging and gilt titles on spine. “Lonesome Dove” was made into one of the most successful mini-series in television history and became what some consider as one of the best westerns of all time. This “Lonesome Dove” book edition was signed in person by the illustrious cast when they appeared at the Lonesome Dove Reunion on 31 March 2016 in Fort Worth, Texas. I obtained all the cast signatures personally during the course of the event. Some of the cast have signed with their character names including Robert Duvall as “Gus”, Rick Schroder as “Newt, Ride the Range”, Chris Cooper as “July” and Barry Tubb as “Jasper Fant”. All cast members have signed in ball point. Included in this package are copies of the photos above from the reunion of Duvall, Schroder, Lane and Cooper. Some of the cast did not attend, including Tommy Lee Jones and Angelica Huston who were scheduled to appear. Also, McMurtry did not attend. Millions of people all over the world cherish Larry McMurtry’s “Lonesome Dove” for its unforgettable characters, compelling story, and timeless messages of loyalty, friendship, and regret. This book won McMurtry the Pulitzer Prize in Literature in 1985. This collection of western tales weaves together the same cast of characters over their lifetimes. You could not ask for a more stunning Collector’s Edition of these highly prized titles. These beautiful books are certainly for the discerning collector and deserve a coveted space in an impressive home library. Not only do these books have aesthetic appeal, but also they will be among cherished editions for generations to come as they tell the tale of the last vestiges of the American West and Texas heroes never to be realized again. Truly, “Lonesome Dove” has earned its reputation as the Bible of Texas – and McMurtry as one of the most masterful wordsmiths of his generation. Larry McMurtry died March 25, 2021 and will forever be associated with his renowned titles, “Horseman Pass By” (movie “Hud”), “Lonesome Dove”, “The Last Picture Show”, “Terms of Endearment”, “Brokeback Mountain” (Oscar-winning screenplay) and countless other works. Cast Signatures and McMurtry signatures have my personal Lifetime Guarantee of Authenticity. The item “LONESOME DOVE Limited SET Easton Press SIGNED MCMURTRY Robert DUVALL+MOVIE Cast” is in sale since Saturday, May 15, 2021. This item is in the category “Books & Magazines\Antiquarian & Collectible”. The seller is “chandu09″ and is located in Dallas, Texas. This item can be shipped worldwide.